I’ve never had a problem using Apple’s automatic updates before and i’m surprised this got passed their testing team. I don’t think this issue affects all macs, but my Late 2011 13″ Macbook was pretty much crippled by the update. I used automatic updates to install the 10.7.3 update from 10.7.2 and upon reboot was greeted by the CUI CUI CUI glitch: 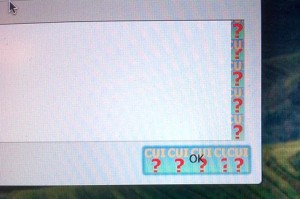 (Image curtesy of OSX Daily, I was so angry I forgot to take a photo!)

There are tonnes of posts about this issue in the Apple support forums and other various news-related sites. Thankfully by installing the stand alone 10.7.3 Combo Update the issue is fixed… One problem though, I couldn’t even open a Finder or Terminal window to even try to install the combo update!

Most of the posts out there recommend either:

Instead, I tried a different approach! I downloaded the 10.7.3 Combo Update and saved it to plain old USB stick (on another computer of course). I then booted into recovery mode (Command-r at boot) and plugged in the USB stick.

In hindsight, I could probably have just downloaded the combo update in recovery mode using Safari (the browse for help option).

I then installed the update, specifying my Macbook’s hdd

This took a good 10 – 15 Minutes, but once it finished (returned to the bash prompt), I rebooted and all was good again! Phew.